Wednesday night, Waterloo city staff presented their proposal for Lexington Road to the public. After three years of silence, we now get to see how we might bridge Waterloo's great cycling gulf.

The proposal is an interim plan. Staff are telling us what they can do now, instead of ten years from now.

As part of resurfacing Lexington Road, the city of Waterloo proposes to create a multi-use trail that turns into a 2-way cycle path over the highway 85 overpass. Because the overpass cannot be structurally modified, the idea is that this cycle path would take up a traffic lane and be protected from traffic by some form of barrier, possibly jersey barriers.

The proposed multi-use trail will connect Davenport to Holbeach Crescent. That will get people on bike across the expressway, and provide connection through the neighbourhood to the Forwell trails and the rest of the Waterloop.

This part of the Lexington corridor would turn into 2 eastbound lanes, and 1 westbound lane. Travelling further west, it opens up to 2 lanes by the time you reach the Dearborn traffic lights at the bottom of the hill. Further west, there are not many changes.


Not to be forgotten are a couple of pedestrian refuges which will make crossing Lexington on foot safer, and catching GRT's route 31 bus on the other side of the street less of a terrifying adventure. (Seriously, I've watched the terrifying game of Frogger that these riders play.)

So, why this plan? What's going on?

Like I said, this is an interim plan. In ten to fifteen years, this road could be reconstructed. Before then, the city hopes to have acquired the land they need (especially around Weber) to create a permanent cycling solution while not constricting traffic. That's their goal.

The bridge has been, and continues to be the worst problem. Anything the city does to it has to be approved by the MTO. Structural changes are extremely unlikely. Even what's proposed here still needs their blessing. The good news is that the MTO is apparently much more willing to consider this kind of plan now than they were four years ago.

The last time this stretch of road came up, a proposal to reduce lanes to introduce on-street bike lanes further west was rejected and deferred by council. Possibly as a result of that, staff want to maintain 4 road lanes west of Dearborn leading up to Weber.

What staff have presented fits within their budget. This means they don't need extra money to do this. But is it enough?

What this proposal does is add a vital, safe cycling link across the expressway to connect Eastbridge to the Waterloop. Filling that gap is critical. So that's very good.

It doesn't complete the Columbia/Lexington east-west corridor. That is a disappointment.

Despite that, I believe we must support this proposal. Here's why:

To "do this right" would require the city to fund a new multi-million dollar plan that will take years, maybe a decade. Recognizing that, City staff rescued the idea of an interim plan from the scrapheap.

They've come up with something that solves the issues that council raised with the previous proposal. They've done it cheaply, and they could have this in front of council for approval this fall, with potential construction in 2016. We need more of this imaginative problem solving. There are so many critical gaps and problem spots in Waterloo region's cycling network that need attention now. But there is only so much money to go around.

If you punish staff for coming up with pragmatic solutions that can be implemented quickly, we will only see improvements when roads come up for full reconstruction, which means our network will only get random improvements going in haphazardly over the coming decades without regard to need.

What this proposal does well is connect Eastbridge to the rest of Waterloo in a way that people of all ages can hop on a bike and use. That is the critical need. It also helps us build cycling numbers and that will in turn increase momentum for other incremental improvements.

And it is a template for future problem-solving. Not every improvement needs to be as polished and completely conceived as Uptown's streetscape. What we need are pilot programs. We need staff and councils willing to engage in low-cost risk taking. We need to fill the gaps in our cycling network now, whatever way we can.

That's why this proposal deserves a thumbs up. It's not the big win some people were hoping for, but it is definitely a win. And small wins over time add up to big gains.

This is a big one! After a four year wait from the last attempt at addressing Waterloo's great cycling gulf, Lexington Road over the expressway is finally back on the table.


There is a public consultation for Columbia St. E and Lexington (from King to Davenport) Wednesday, June 3rd from 6:00pm to 8:00pm, at the Mennonite Brethren Church, 245 Lexington Road. 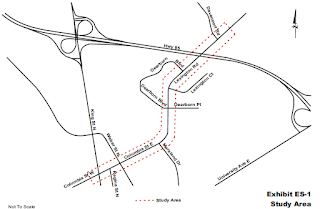 If you want to ride a bike in the city of Waterloo, please consider attending. If you can't, then make a point to provide feedback when the material from the consultation goes online.


In 2011, the city consulted on potential improvements that included on-street bike lanes, and reducing Lexington to 3 lanes between Davenport and Marsland. Despite the fact that the road is overbuilt for the amount of traffic it sees, the proposal drew concerns and unanswered questions from council at the time and the project was deferred in 2012.

Since then, Davenport's road diet has been completed, and so have the bike lanes along Lexington east of Davenport (with some multi-use trail action coming as well.) Hillside Park and Forwell Creek Park are now part of the "Waterloop" and crossing and connectivity points are being improved.

What will staff bring forward at the new consultation? I'm not sure, but it will hopefully provide a good cycling connection to the Waterloop, and reduce the speeding problem along Lexington. Could it even fill the very challenging King-Weber gap? We'll see.

It will need public support! I hope to see you there.