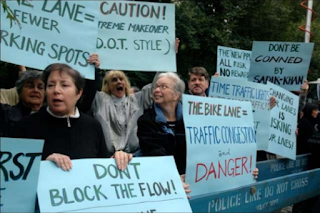 There’s a scourge on our roads, folks. Our comfort and safety is being threatened by road users who bend and break the rules, who fail in their duty of care, and who often move in casual disregard for their own safety or that of others.

Oh, and drivers! And also, pedestrians!

Actually, all of us human beings, regardless of whether we're -ists or -ers or -ians.

Despite decades of regulation and good intentions, it doesn’t matter whether we’re behind the wheel, behind the handlebars or just simply on foot: we still get it wrong. People speed. People jaywalk. People ride on the sidewalk. And sometimes, people commit mistakes of judgement that have tragic, fatal consequences.

But lately, the Record’s columnists have taken it upon themselves to single out one group of road users for special attention: those darned cyclists. In doing so, they’re reinforcing the myth that we’re all in our own warring camps: the drivers against the cyclists against the pedestrians. Never shall they mix!

This myth ignores the reality that the “cyclist” you pass in your car is just a person on a bike, today. Tomorrow, they may be driving down your street as you walk to the bus. You would hope that when they do, they obey the speed limit. Today, they are hoping you give them at least one metre and pass carefully.

Maybe we should stop saying "cyclist" or "driver" or "pedestrian" and start talking about people getting around in different ways.

You may have heard about a bylaw review where the region is trying to sort out some of the rules that leave us tied up when we try and get around. It will rationalize rules about the use of rollerblades on trails and how automobiles and light rail will interact, for instance. The region also has a bylaw prohibiting side-by-side cycling which is redundant in the face of the Highway Traffic Act, which has clear rules that slower traffic should turn out to the right to allow passing. Cities like Toronto and Ottawa have long since removed such a rule from the book without problems. (Toronto has a great guide on when you should, and shouldn't, consider riding beside someone else.) Region staff proposes tidying this up as well.

But, it's that one proposed rule change has provoked quite a reaction. If ever there was a tempest in a teacup, this is it.

Record columnist Luisa D’Amato decries this and paints “cyclists” as overprivileged one-percenters who are “wagging the dog”. Peter Shawn Taylor has reached all the way around the world to an Australian study years ago that opined side-by-side cycling might create some kind of aggressive cyclist menace, like some kind of “Reefer Madness” awaits us if we don’t keep our society’s bike users in check.

It’s been a the week since that column was published. Every week, 40 people die on the road in Canada alone, the vast majority because of cars. The idea of bikes stealing away the road and threatening us all whips us into a lather. But dozens of real deaths every week get a shrug and a pass. Accidents happen.

For all I talk about riding a bike, I don't see myself as a "cyclist". Like many others, I ride my bike on our region’s roads. I also drive my car on those same roads. The difference is that when I ride, some people have already judged me with all the sins and offences of every bad cyclist they have seen, and they have found me guilty. If I'm behind the wheel, I carry no such burden.

And yet it’s behind the wheel that we, as human beings, are the most dangerous.

These latest developments are part of a new wave of bikelash in Waterloo region. (Some would say that's a good sign.) After Kitchener traffic calming projects brought bike lanes to a couple of streets in the face of street residents' objections, there's a sense that we're somehow doing too much for "those people". But there are no "those people" involved. There's just all of us, trying to get around.

And if more of us are able to get around by bike, is that really so bad? We're much, much less likely to accidentally kill someone on the way.
Posted by cdk at 8:15 AM 5 comments: