(Oh thank god I'm not talking about LRT for once.)

I attended the initial meeting for the proposed Spur Line multi-use trail tonight. Interesting experience. The thrust of the meeting was to get the major vision, issues, and details from the public on the table so that they can be considered in detail. 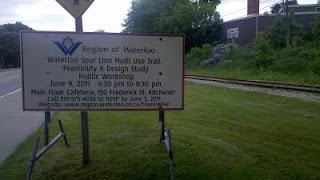 The Region wants to put in a multi-use (pedestrian, cycling, etc.) trail next to the rails along this section, as there is already an ad-hoc dirt trail in place, formed over the decades by the many users of this area. 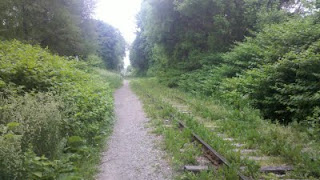 The reassuring part was that most people there seemed to genuinely want to see this trail go through, as it would be a valuable link in our trail network. I share this opinion, as I live within a short stroll of the trail near its middle, and use it to access Uptown Waterloo frequently. Today I even used the trail in the other direction, which led me most of the way to Regional Headquarters, where the meeting was held!

Still, there were many issues raised, and there are some interests that are in conflict. Lighting and safety concerns of users on one hand, against the light pollution and noise and privacy worries of abutting landowners on the other. And complexities abound even on issues like this: it was raised that all-night lighting could give only the illusion of late night safety. 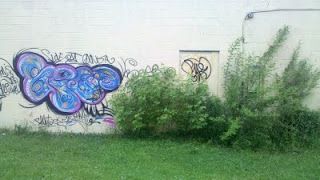 I think some of the most interesting twists involve the rail line itself, and I heard a lot of conflicting opinion:

And to further confound things, a gentleman at our table personally wanted to see this part of the spur used for LRT, practical considerations such as suitability of location aside.

I also learned more of a (harmless) derailment of the chemical train not long ago, caused (ostensibly) by Len's Mill's practice of shoveling their snow onto the rails. Also, Len's Mill parking appears to encroach on the Spur land itself, as does the paved surface of a number of other businesses. A lot of people are in for a surprise.

The Spur land is theoretically 20 metres wide for most of its length, which means that there should be room for the 6 metre "train envelope" and the 4-5m needed for the trail. In places this looks like a challenge, but overgrowth and encroachment shrink the apparent space. Still, I think it's safe to assume that a lot of property owners are making informal use of space they don't own, and this will need to be resolved. I'm betting that a number of misplaced fences may get ripped out, to the dismay of the nearby owners.

Another twist: widening and realignment of Weber St. But that part appears to be well in hand, with widening plans proceeding with the trail in mind. A regional rep described the intent to provide crossing assistance in the form of an pedestrian island at the point of trail crossing. 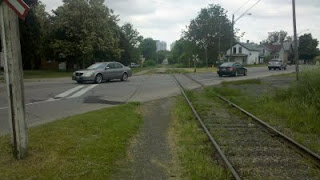 Still, over all the attendees were positive. More than one stated that their desire to see this become a proper trail stretches back decades. There are complications with the LRT project's potential impact on the rail corridor in general, and the sheer ludicrousness that we still have a train full of ammonia and sulphuric acid trundling through the Waterloo core, but the rough outline could see something ready for construction as early as 2012. Wouldn't that be something? 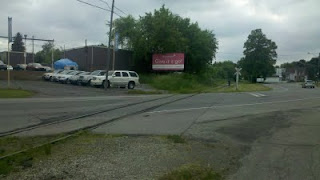 Edit: One important detail. Price was briefly mentioned. The ballpark number was $1.8-2 million dollars. But it's highly dependent on the design proposal and the engineering needs. Funding is "earmarked" but not approved yet. The usual possibilities about sponsorship and private partnership were bandied about. Not much real information here. (On the other hand, it's just a trail. It's 0.25% of the cost of LRT ack I mentioned LRT I think it won't be a big deal.)
Posted by cdk at 9:54 PM