Bridge/Northfield and the Poor Pedestrians

Addendum: After sending this letter I did receive a response. Most of the pedestrian concerns are addressed, including sidewalk access along the fronts of the development and to the bus stop/path access, and pedestrian refuge at that point-- provided by the developer.

It's still a very suburban development that in some places pays lip service to vibrant streetscape concepts, and there will be difficulty at the Labrador intersection, but the worst concerns for pedestrians are addressed.

I work very close to a proposed mixed-use development at Bridge and Northfield. As I'm a transit user as often as I'm a driver or cyclist, pedestrian access in the area is very important to me. And it's awful: impossible intersections, missing sidewalks, no lighting.

I'm hoping that the development will bring with it some improvements to the intersections and pedestrian infrastructure (like, you know... sidewalks) but I'm trying to drive the point home with Waterloo city council none the less.


The following is from a submission I put together this holiday morning:


To whom it may concern,

I work at a business near Bridge St. and Labrador St. in Waterloo. I am writing to express my support for the amendments to allow development of a mixed-use node at Northfield and Bridge. At the moment, this part of town has almost nothing commercial to support the many people who work and live in the area, and plans I have seen of the development are, if not perfect, at least working towards the goals of higher density and infill development.

As a driver, transit user and cyclist, I urge council to take into account transit, pedestrian and cycling access in this area when looking at the developers’ plans and the infrastructure needs they generate.

Most urgent is pedestrian access: there is no suitable pedestrian access to Northfield or Bridge along this property, despite the presence of GRT stops and pathway connections to residential neighbourhoods. The intersection at Bridge and Labrador is now extremely busy at rush hour, with dangerous left turns and aggressive drivers making Bridge almost impossible to get across for those on foot. The proposed development will only make this worse, so these problems must be addressed before the development is complete.

On transit, there are two GRT bus routes which serve this intersection now (31 and 35, connecting from Conestoga Mall to U of W and Uptown respectively) and in 2013 GRT plans to implement and extend 2 iXpress routes through this location, providing express access to much of the city of Waterloo and connections to future LRT.

Because of this, city council should push for more density and reduced parking for the buildings at this site. We don’t have a lot of open space to infill and this is a great opportunity to define an anchor for this area. It should not be wasted.

I have attached a map and photos to demonstrate some of the problems I have seen in the area. If the city addresses these problems promptly, this development would be a major benefit to the area. Without that support, however, I see the increased traffic becoming a major threat to my personal safety whether I am on foot or in car. 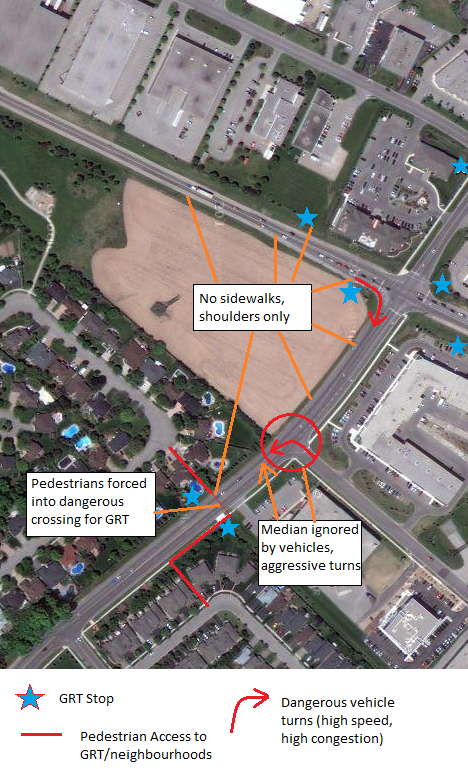 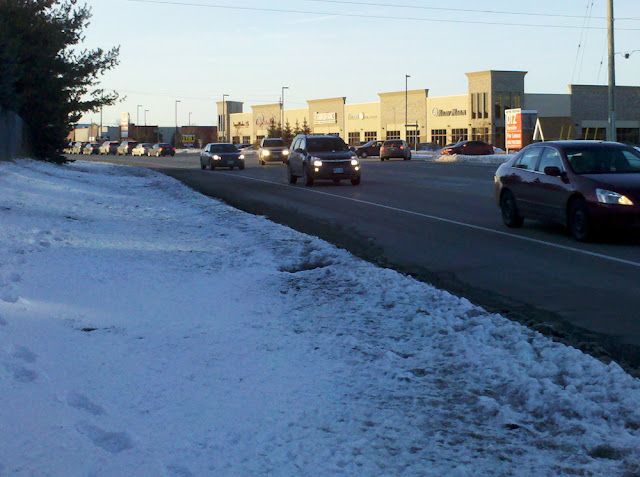 Congestion on Bridge cuts visibility, and forces left turners from Labrador to turn blind onto Bridge. They routinely use the median as a merge lane. Southbound traffic often dives into the paved shoulder to avoid.

This makes pedestrian crossing at Labrador almost impossible, and crossing at the bus stop location necessary (but still dangerous.)