No posts for a while, so let's cover a number of topics. Today's topic theme: Science! It's what's for breakfast.

I remember the downtown Kitchener of the 90's. Like many long-time residents, this memory has coloured my perception.

In 2007, despite being within walking distance of downtown Kitchener from a house we owned on Cherry St., our lives revolved around uptown Waterloo. Which proved to be an inconvenience because we now faced a 35-40 minute walk to get there. But I remember our first weekend at that place, walking into the downtown, looking for somewhere to enjoy a nice Sunday afternoon... and drawing a complete blank.

In 2009, we decided to move-- not too far away, over to Peltz Avenue. Today is the 4 year anniversary of moving into the house we still live in. Our lives still revolved around uptown Waterloo, but my workplace was now out at Northfield and Bridge (and still is)-- transit options had forced our hand.

In 2012, I observed that we were heading into downtown Kitchener nearly as often as uptown Waterloo. The opening of places like McCabes and Firkin paved the way, we re-discovered the Boathouse, and then later in the year Imbibe became a frequent attraction.

Fast-forward to a Sunday afternoon's walk home from the Boathouse last weekend.


On that walk home, we observed that we're now downtown Kitchener for our dining options most of the time. Uptown hasn't quite fallen out of favour, it just has less to offer (apart from patios... so we may see a summer resurgence.)

Then, we stopped off to opportunistically check out an open house on Heins Street, very close to Victoria Park. And it was tempting. And I realized: the constraints to our location (I want to maintain a low car commuting rate to allow us to share just one car) is loosening due to transit improvements! The rerouted 35 (it'll be renamed 6) provides immediate benefit for direct travel to work. The new iXpress routes allow for better connections to Waterloo destinations off the mainline. And, of course, LRT is coming.

Taken together, it made the idea of living closer to downtown Kitchener-- its attractions and its renewal-- much more appealing. We aren't exactly raring to move. But this is an eye-opening realization.

I'll say that I really don't care as long as they don't get it wrong. The name is okay.

I'll tell you what I do care about: this result from the branding telephone survey. It's not about the name, it's about 305 random people's perceptions of the Rapid Transit project: 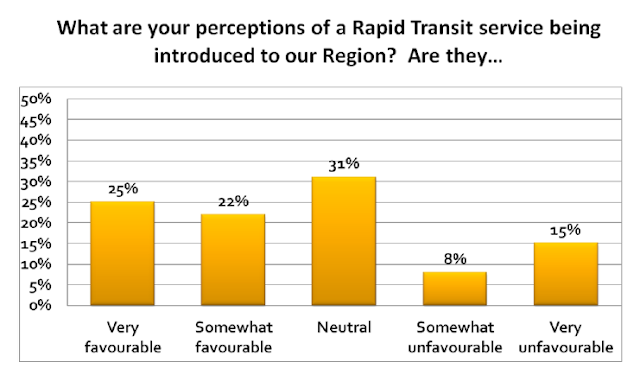 Whoah. That's 47% favourable to 23% unfavourable. People who are still carrying on with the narrative that "nobody wants LRT" need to consider the distinct possibility that they are in an echo chamber, convinced their voices are the only ones.

(Since the theme is Science-- and apparently breakfasts-- I'll point out that this confidence interval calculator shows that 305 random participants is enough for a usual standard in survey confidence: answers are +/- 5%, 95% of the time. Even on a regional population of 550,000. Unless there is something flawed in the sampling method, with margins like this, it is extremely unlikely-- much less than 5%, to be sure-- that unfavourables are greater than favourables, let alone close to it.)

Okay, let's move on from statistics. It is one of my least favourite sciences.

Kitchener has decided to try sharrows on King Street (along with a number of other measures.) These sharrows are an important step to encourage better road sharing between motorists and cyclists. 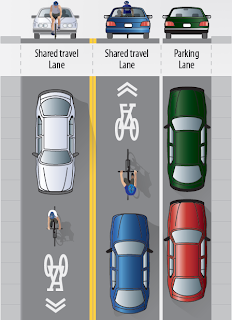 I spoke to council and wrote about this topic on behalf of TriTAG. The sharrows are important, but what really gets us excited is that Kitchener is going to measure the effects of the change with cycling counts before and after!

And why shouldn't they measure? We want to know if this sort of thing works. We want to know what works well, and what doesn't, so that we can use that information when choosing future improvements... or to fix and correct flaws that are keeping good ideas from reaching their full potential.

Just last week I was cycling on King St. in downtown Kitchener, taking the lane. Sharrows or no, the legal right exists to take the full traffic lane if there is not enough room for a car to safely pass. The sharrows merely remind everyone about the expectation.

The funny part was, traffic was moving so slow that I went to the sidewalk and (also legally) walked my bike to my destination and it was faster. But that's something you can do when your conveyance doesn't weigh two tons or is the size of small room.

I can't make this section title fit with the Science theme, but everyone likes bonus Science. Since starting this post, I discovered that the City of Waterloo is restarting its Uptown Streetscape improvement project. This project is looking at how to fix the situation in Uptown (north of Erb) where traffic lanes are of substandard width and sidewalks are narrow and crappy in the urban core of the city. It could (and in my opinion should) result in the removal of 1 or 2 traffic lanes. 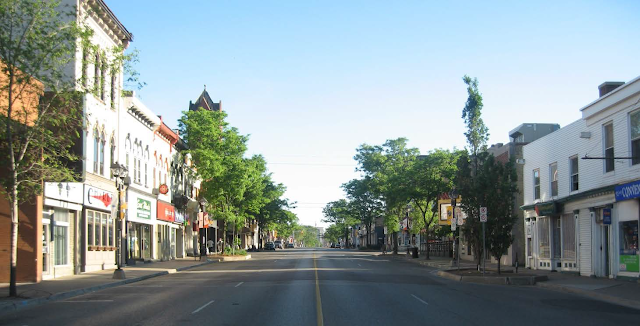 This change makes complete sense to me, because King Street south of the Town Square will only have 2 traffic lanes in just a couple short years due to the Rapid Transit construction. So why continue with this fantasy that we can have a major arterial road through the pedestrian heart of the city?

This project was going through consultations in 2010, but was suspended in 2011 because the details of RT project would affect things so much. But now the project is restarting. We should soon hear news of new public consultations.

Waterloo needs only look a few kilometres down King Street for the inspiration they need. Kitchener has done a fantastic job with their King reconstruction, and the model could work in uptown.

And on that note, I'll wrap this post up.