For some years, I have been saying that we have some pretty good cycling routes in Waterloo Region, but they are too disconnected. I've been mulling a question: How do you best show the gaps in our cycling network that need attention?

To answer this question, you must define our cycling network. For instance: while I know some cyclists will brave the major arterial roads such as King, Weber, Northfield, University, and so on, I would not include the portions of those roads that don't provide any cycling infrastructure as part of my cycling network. And in fact, I go to great lengths to avoid them as unpleasant and too dangerous. In general, casual and new cyclists will also do this, unless they have no choice. A lack of alternatives may keep someone from becoming a cyclist at all.

On the other hand, parts of this city that aren't "officially" cycling routes are, in fact, very suitable for cycling-- most of our minor side streets and neighbourhoods are calm enough to be welcoming to cyclists.

I've played a bit with Google Maps, learning how to use its javascript API to visually sift through geographic information. I've focused on the City of Waterloo-- after all, Waterloo (the City) has a silver ranking for cycling friendliness and also where I do most of my commute and utility cycling, despite living just over the border in Kitchener.

I haven't worked out how to get this kind of javascript querying of Google Maps to embed nicely in Blogger, but that's okay. In the end I took information out of two maps and combined them:
The result is below. I recommend you click through to see the image in all its high-res glory: 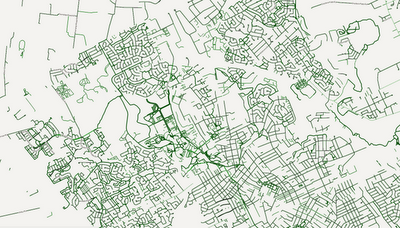 Even without zooming in, there should be one thing that's abundantly clear. Do you see it? Viciously cutting an uninterrupted swath across the entire northern corner of the city?

It's Waterloo's biggest cycling problem. It's the Great Conestoga Parkway Chasm. Like the Amazon River, the Parkway snakes its way through our city, and you take your life in your hands to ford it.

By excluding from my map anything that a casual cyclist would reject, I can reveal in stark relief just how big a problem this is for cyclists. In Waterloo, every crossing of the Parkway is an arterial road. None of them have cycling infrastructure. And they look like this:

Enough to send your sense of self-preservation into a tizzy, and make you think about leaving two wheels behind and taking four.

Two observations to make. One: none of these routes are the kind you'd want your child biking on. And two: Lexington is the least bad of a very bad lot.

As it stands, we have a completely disconnected cycling network. For a city priding itself on its move towards complete streets, this should be Number One on its cycling improvement agenda. Fortunately, providing some small solution to this problem does appear to be on the city's radar.

With the proposed Lexington upgrade, we go from completely disconnected to one imperfect and tenuous connection across the Parkway Gulf. A step in the right direction. It must happen, as soon as possible: the Gulf is a major impediment to the adoption of cycling by young and old.

But it must also be followed by other crossing points for cyclists and pedestrians. I've been over each of these monstrous crossings on foot, and they range from unpleasant to horrifying. I can tell you what Northfield Drive is like, in January after dark as the wind and snow drives down and the speeding headlights are everywhere. I've used the Gulf and Giant River metaphors already, but for pedestrians the Parkway is also a wall.

Dear City of Waterloo council, should you read this: please remember what I've said when the Lexington improvements come before you.

Why Davenport is a good idea

I know Davenport Road pretty well. I used to live on Kingscourt, behind Conestoga Mall. You needed to have your wits about you on Davenport Road.

Davenport used to be a speedway. A twisty 1980s era 4-lane road, filled with obstacles like an overflowing Timmy's drivethrough (serving as a kind of multi-level symbolic reminder of how we're getting some pretty basic things in our life badly wrong), stopped left-turners waiting to get into the mall, and of course the cars who weave in between it all.

What it is now is being billed as Waterloo's "first complete street". Really, it's our first no-holds-barred Road Diet.

You've probably heard that term bandied about for a while now, it's been seeping into popular usage for a while. On the surface, it sounds like bald euphemism-- what is a road diet, then, but less road for cars to fit on?-- but road diets are a remarkable example of the non-intuitive nature of traffic. From less, you get more. Or at least, you get the same amount of car capacity, but you get more of other things: cycling lanes, pedestrian friendliness, safety, adherence to speed limits, visual attractiveness...

But don't take it from me. Here's Streetfilm's piece on Road Diets:

A 2-lane road with turn lanes, like new Davenport, typically faces opposition from people who think that it is going in the wrong direction when it comes to accommodating our growing traffic. But, there is data (such as Walkable's report [pdf]) which shows that road diets like this frequently maintain the amount of traffic capacity that the old road had, especially when the number of driveways and turning opportunities on the road are limited-- such as they are on Davenport.

The dieted road is slower. No question. But it's not congestion so much-- the pace of traffic self-limits better. Without an extra lane to allow passing, the pace is now set by the prudent driver. We're also getting better at designing roads that psychologically cause drivers to limit their speed. And the turn lanes still allow for good traffic flow at intersections-- the difference is intersections are no longer chicanes and obstacles in the middle of a long speedway.

So traffic is calmer, the opportunity for and severity of accidents is reduced, and the extra space can allow for cycling lanes, pedestrian refuges and plain old landscaping.

And still, initial reactions to Davenport reveal a lot of criticism and doubt. Even someone whose backyard has been driven into twice openly wishes that it was still four lanes. This underscores how intuition in urban design has really led us down the garden path-- and then caused us to dig up the garden path, replace it with a freeway, and wonder why the garden withered and died.

What road diets reveal to us in great clarity is the folly in optimizing for the car. Much of the last half-century has been based around the premise that what's good for the car is good for everyone, because everyone drives. Instead, the truth is that what's good for the car comes at the expense of just about everything else, and the incremental denial of spaces to anyone but the automobile-enabled ends up forcing everyone to use a car. Finally, when capacity for cars is reached, we end up with an urban form that punishes everyone, and with no easy fix available.

We need an urban form that enables car use, but does not optimize for it, especially on a road like Davenport which is not a major thoroughfare. 4-lane road capacity turns out to be only marginally better than a well-designed 2 lane road with proper turn facilities. That marginal improvement comes at the expense of usefulness for other modes, and of safety for all.

Oh, and hey! The new Davenport has Waterloo's first bike box! But that's a topic for another time...