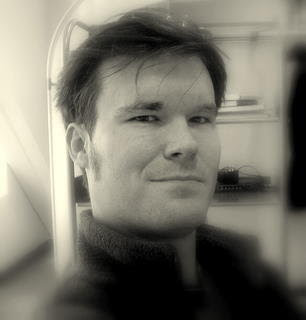 Chris came to Waterloo to pursue a Computer Science degree at the University of Waterloo. After a nomadic childhood where he never spent more than three years in one place, he was surprised to find a strong desire to remain in town after graduation. Now, after almost twenty years and a dozen addresses on either side of the Kitchener/Waterloo border, he has decided that this is home.

Chris works as a manager for an engineering software firm in Waterloo, and started looking for ways to curb his car use in 2005 with the advent of GRT's iXpress. Since then he has had a growing interest in transit, active transportation and urbanization. Currently he tackles a nine kilometre commute using virtually every mode possible in Waterloo: public transit, cycling, driving, carpooling, and even the occasional walk and telecommute.

In his spare time, Chris can often be found in his garage brewing beer, out walking or cycling, or on stage at the Kitchener Waterloo Little Theatre. Most recently, Chris starred as Oscar Madison in TenBareToes' production of The Odd Couple.