Getting priorities right in Uptown

The latest iteration of plans for reconstructing King Street in Uptown into a walking and cycling friendly place are up for your perusal and feedback. Take a look and provide your comments soon!

There's a lot to like here. King as a two-lane street allows for improvements across the board:
There's other great features in here too: some protected intersection features at Erb and at Bridgeport, and positioning of bus pads and parking on the street side of the bike lanes, which limits dooring and blocking potential. 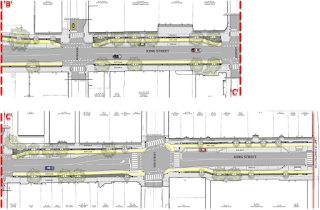 It's encouraging to see this plan, particularly as evidence mounts of the positive safety impacts and economic benefits that come from humanizing our downtown spaces.

Still, there are some valid criticisms and concerns. I spoke with one well-spoken gentleman, and he aired a number of complaints:
His word for this plan was "myopic". He claimed that King needed to be an arterial road in order to maintain heavy truck access for these businesses to function, and he talked at length about a situation in Cambridge where a semi got stuck in a bad turn and couldn't reverse due to backed up traffic.

It's not that he doesn't have a point. But he was trying to paint these points as deal killers or catastrophes, and they are not. They are simply inconveniences that are worth bearing for the benefits we'll gain. Here's why.

Arterial roads are for through traffic, our downtowns are destinations

King was built as a four-lane arterial, which (along with Bridgeport and Erb) has resulted in a tremendous amount of through traffic passing through Uptown. Some business owners have seen this as their lifeblood, but through traffic doesn't tend to stop.


Instead, the traffic volumes make Uptown an unsafe location for people on foot or bike. I'm recalling the death of a student in the heart of Uptown in 2012, but there have been numerous other fatalities along King St. (edit: including, tragically, one today.) In these cases, blame gets apportioned to one party or the other but the cause of death is the same: speed.

Speed comes from wide roadways, and wide roadways come from this myth that we need to route cross-town traffic through our dense cores at the expense of all other road users.

Which makes these places more dangerous, less pleasant places to be, which in turn hampers their economic potential.

King street is a city street. Its job isn't through traffic, it's destination traffic. Drive it if you want to go to Uptown. If you're travelling a long way by car, then use Weber, or Westmount, or the expressway.

Firstly, most of Uptown's King St. businesses have rear access. Laneways and rear parking exist for everything between William and Erb.

There's some additional lane width built into the street (3.8m per lane, which is more generous than the regional standard of 3.35m, which is still wider than the existing lanes which are too narrow for buses to occupy safely, hence the current practice of "straddling.")

That room should allow for most traffic to filter around the occasional unloading vehicle.

But if not, there are other steps that can be taken. Early or late deliveries can take advantage of available on-street parking. And smaller delivery vehicles can be used. Does Tim Hortons need to be serviced by a semitrailer? If downtown Toronto Tims can get their supplies, so can Uptown Waterloo's.

These are inconveniences, but if Uptown becomes a more attractive destination for people to visit, then businesses will find ways to overcome obstacles to better serve a growing customer base.

We can't keep up with traffic demand, but we can build an accessible city


There are a lot of new homes being built along the central corridor, and with the arrival of LRT, Uptown Waterloo is well positioned to serve the needs of these residents arriving on foot, transit, or bicycle.

And those residents will need to be able to rely on those modes of travel. We're learning that sprawl and car dependence results in a massively expensive and unsolvable traffic problem: you just can't build enough road and parking to satisfy demand without inducing even more, and the very act of trying will kill any human-friendly space as well as our municipal budget.

So instead, intensification needs to support walkability, and good transit and cycling options provide excellent access for people to the destinations they seek.

The Uptown plan shows how to do just this. An improved, safer pedestrian realm. Regional transit improvements enabling frictionless travel along the corridor and improved cross-town travel. Bike lanes to allow for "a little too far to walk" trips in speed and comfort.

It's the kind of city I want to live in, and I hope you see the value of it too. If that value appears to introduce some automotive inconveniences, it's only because we're used to planners trying to make driving easier at the cost of absolutely everything else in our lives: walkability, our safety, cost, and even our health.

This plan is what getting priorities right looks like.