It's very easy to write a post when something gets up in my urbanist junk. I see red and the words flow. Recently I've been pretty critical of our municipal governments.

But here's the thing: by and large, and more so than most anywhere else in this province the region of Waterloo gets it so very, very right. I'm proud to live here, and it is the general positive direction we are in, and the vision this place has, that makes me happy to get involved. Because a man has hope living here.

Here's a couple of things, just from today.

The region got hammered by a ruling from the Ontario Municipal Board, the entity that former BC premier Mike Harcourt has called a "medieval abomination". The OMB has sided with developers-- who often direct much more legal resources at OMB hearings and seem to (almost) always come away with the upper hand-- against the region in its bid to limit greenfield development (i.e. sprawl.)

But the region is not going to take it lying down, and will appeal the ruling. I don't know if they'll win, but it will cast a stark light on the OMB's heavy, undemocratic hand in municipal planning. If nothing else, we'll go down fighting for principles.

Let's not forget, as quoted in the appeal article: the region of Waterloo has maybe the most aggressive growth management strategy in Ontario. It is the only municipality that is defining a countryside line to limit sprawl (and this, too, is going to be the subject of an OMB ruling.) We are blazing a trail. The Ontario "Places to Grow" act is based in no small part on the work done by local governments here in this region.

Along these very lines, today the Central Transit Corridor project presented to regional council on its draft community building strategy, apparently published just a few days ago. (I got listed as a stakeholder, thanks to one day in May I got to work with them on the Midtown vision.) It is pretty inspiring stuff, not exactly a prescriptive document but a descriptive one of where we can go from here. And it's heady stuff. The stuff cities are made of.

On a much smaller scale, today council decided to put aside the quantitative analysis by staff and support a pedestrian signal crossing at Weber and Wilhelm, where some major widening is happening and the Spur Trail will eventually intersect. The Mount Hope - Breithaupt Park neighbourhood association went to bat, and councilors took a more strategic view of the situation and almost unanimously supported aiding pedestrian movement across a widened Weber.

As a bonus to all of this, some measured progress is also being made on pedestrian infrastructure for the vision impaired.

So, let's not all be doom and gloom? I want to compliment the region for getting it right and heading in a positive direction.


This is a tough year for budgeting, and the mantra must be "everybody feels the pain". While I, personally, would willingly sustain a higher tax hike to keep moving forward, many disagree. Council had to strike a balance between the two. Certain regrettable, but understandable moves have been made, like the delay of the long-awaited Spur Line trail ($3M in capital savings).

Other decisions are less understandable.

The "200 iXpress" is the kind of transit success story that is the wet dream of municipalities struggling with road expenses. It has grown in ridership from a couple of thousand a day when it launched seven years ago, to over 14,000 a day last year. Ridership has driven repeated frequency improvements, from half hour to 15 minutes to 10 minutes, and these frequency improvements in turn have driven ridership growth. It's a virtuous cycle, and a beautiful example of the critical importance of frequency in transit.

The 200 is a route that has been noted as seeing not only high peak volumes, but healthy off-peak ridership. Because many (if not most) of its buses are standing-room only for at least part of its route, it must be financially a star performer. It sees strong student ridership, obviously, but also strong "choice" ridership from people who recognize a good service and will adopt it over other alternatives.

And it serves a route that will become rail-based in less than five years. An ambitious step by the region in search of a better way for its citizens to move about.

In the face of this blistering, searing success, last night regional council voted to cool things down. For July and August, iXpress frequency will drop back from 10 minutes to 15. This move will save the average household a whopping $1.46. (estimate TriTAG)

There are two negative consequences we must consider from this move.

The justification for lower frequency is lower summer ridership. There lies the temptation to "optimize" the line for these months, to trim a few hundred G's from the cost of providing the service. But that justification ignores the effect of frequency on ridership. We're breaking the virtuous cycle in place, and possibly running it backwards.

Reduced frequency will reduce ridership, because the service is not so attractive. For some, it will not be there when they need it, without looking for a schedule, and this will turn them off. This, in turn, will offer justification to further frequency reductions if you are looking for short-term cost cutting measures.

The region has stated in master plans and megaprojects that it wants to not only increase transit use but multiply it. It needs to keep its eyes on this goal, but budget pressures this year have caused its attention to wander. After implementing plans that will increase household tax levies by $20 a year, why put the success of those plans at risk for the price of a Tim's medium coffee?

Another justification for lower frequency has been put forward (pp.76-77):

(...)By reducing the frequency of service from 10 minutes to 15 minutes on Route 200 iXpress during the midday in July and August, 24% of midday trips would exceed the GRT off-peak service standard of a full seated load (35 passengers). In some cases buses would leave passengers waiting for the next bus. This would occur on average twice a week (0.5% of trips).

In fact, as I understand it (from Councilor Mitchell's tweeted clarification) the approved cut was in fact all day and staff indicated that buses would leave passengers behind twice a day.

In other words, at the one point of the year where iXpress is providing enough capacity to not fail its passengers, council has decided to "optimize" service so that it provides an acceptable level of failure.


This is deeply troubling on two counts. Firstly, unreliability is one of the most costly flaws in transit, that has a disproportionate effect on turning people off using it:

One statistic in the study stands out in particular and should give transit agencies pause: More than half of the riders said they had reduced their use of public transportation specifically because of its unreliability. Most of them didn't just make fewer trips overall; rather, they switched to other modes of transportation to fill the void.

These words should freeze councilors' hearts. But the second troubling evidence is that council seems to discount this deliberate unreliability as an issue. They seem to believe there is an acceptable level of service that involves leaving people behind every day.

These would-be passengers will get a clear message that the region has little regard for its transit users. And they will abandon transit, if they can.

It seems as if council has lost the plot. When the pressure is on, the region's long term strategy to shift itself towards a more sustainable (i.e. affordable) future model is put in jeopardy by short sighted penny-pinching. But all is not lost.

I would expect that the consequences of council's decision should be obvious and easy to demonstrate. In fact, the councilors who voted for this cut should be prepared to get an earful from the transit users denied service. There should be no surprises, or ambiguity about cause and effect. We should see ridership negatively affected, complaints increase, and no small amount of public ire directed towards this decision.

And then we can remind council of their goals, the LRT system they have hung their hat on, and that their small cost-cutting victory of today is putting their large victory of tomorrow at risk. I hope we will see good sense eventually prevail. Neither council nor the people of Waterloo can afford to damage the conditions that will make LRT successful, the same conditions that have doubled transit ridership in the last ten years.

If nothing else, we will be shown that, when attracting people to transit, there is no room for an "acceptable level of failure". 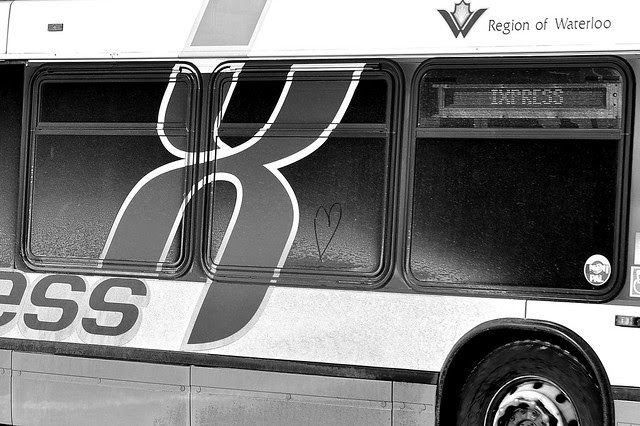