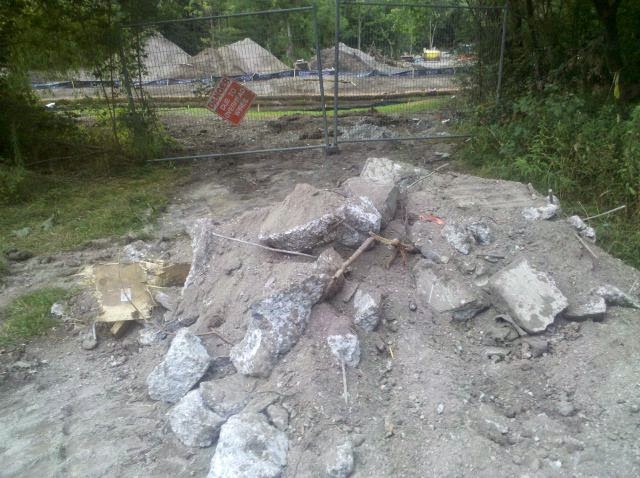 It's actually a relief that this week's getting around town without a car was uneventful. The two weeks prior provided lots of fodder for blog posts, but it wears down a fella, you know?

One big milestone this week though. I've now cycled 1100km for the year. That matches the high water mark I set in 2010: from now on, every ride is personal-record-setting. I'm confident that I can break 1500km, and considering setting my sights on the 2 megametre mark.

There was some minor, though not unpleasant shifts in the routine this week:

Monday: My company's Habitat for Humanity build day! I was presented with an opportunity to cycle commute somewhere completely different: Howe Drive, near Westmount and Highway 8. That was a pleasant ride, almost all trails and side road, though I did discover that Concordia Park has the same sewer affliction as Hillside Park: trail closure for construction forcing me to detour.

I'm impressed with trail connectivity on Kitchener's southwest side, though the expressway remains an obstacle. I was glad I didn't have to go any further south along Westmount than the 50m or so it took to get from trailhead to build site.

Also, no lost appendages or broken limbs. A total success!

Tuesday: TriTAG hat on for the afternoon, to have a meeting with Waterloo city government and a developer. Which meant dressing up beyond the usual standards for a software geek, and arriving Uptown without being dripping with sweat.

The rest of the week: The aforementioned Hillside Park sewer construction work is progressing. Over the last couple of weeks, I saw some depressing signs of construction crews taking two steps forward, one step back:

The Hillside Park work can't end soon enough for me. It's my preferred cycling route (and a great way to get from Lexington to the Lincoln neighbourhood), and it has been closed all year. Originally supposed to be done in Spring 2012, and then in mid-July, I admit I will be surprised if it reopens in August. But it's getting closer.

A few other route alterations from routine: a trip down the Iron Horse to pick up a piccolo from a prescribed piccolo drop-off point (don't ask), and a trip to the chiropractor this morning which meant tackling the Lancaster/Bridge roundabout, and Bridge St (a route that I have grown increasingly unhappy about). At least the construction signs are gone.

Erin returns this afternoon for a weekend off from birdnerding. Two whole days with her this time! Maybe I'll sneak the Matrix out to fill water jugs so I can brew on holiday Monday. That isn't cheating, is it?

Email ThisBlogThis!Share to TwitterShare to FacebookShare to Pinterest
Labels: cycling, grt, hillside park, lexington, Life On A Bike in KW