Help us reshape our Uptown 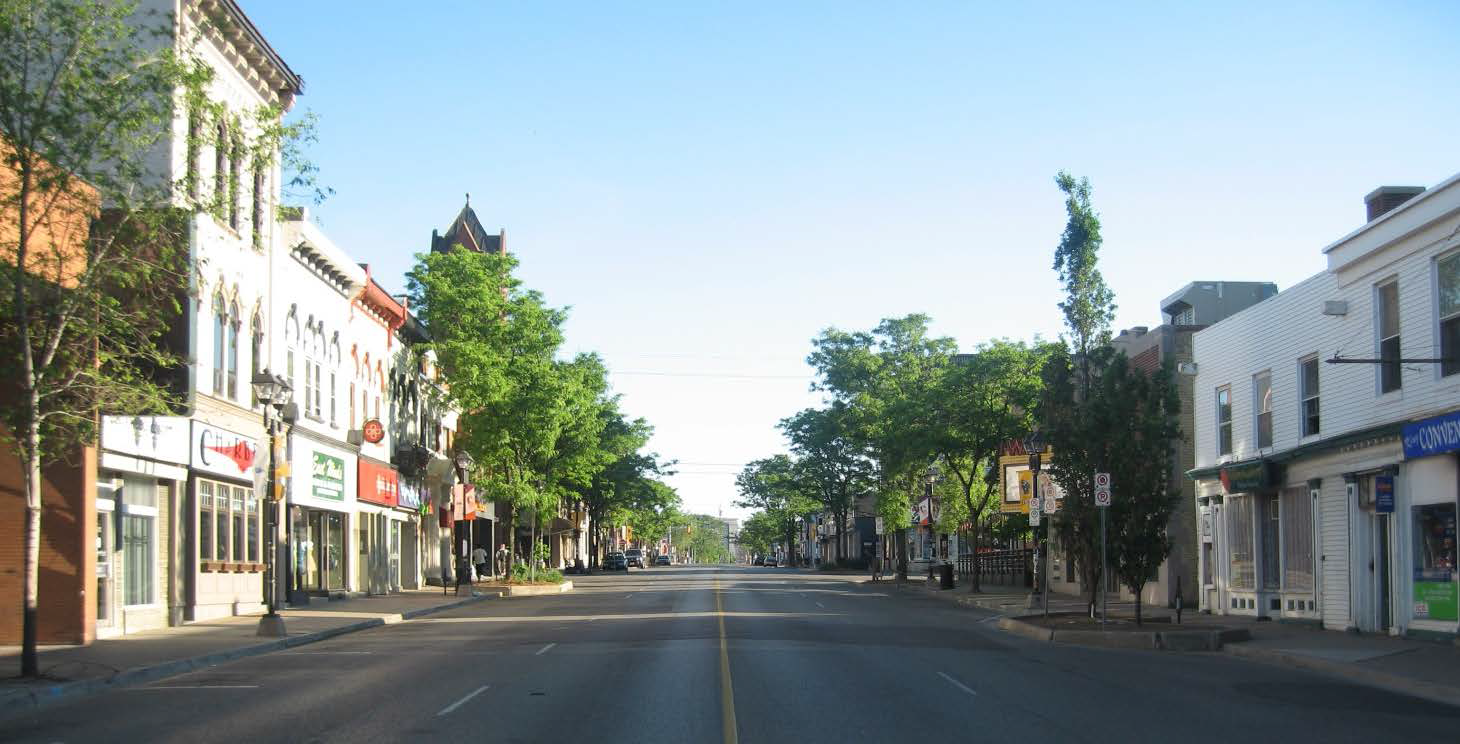 It's really quite amazing, isn't it? Enough to leave you thinking that we are on a road to a more human-friendly city, and that public engagement can have a real impact. But we're not there yet.

The Uptown Streetscape Improvement project originally started as a lighting replacement project but has grown quite a lot since. It was shelved for a few years while we answered the LRT question (and finalized the design). If the project hadn't been put on pause, though, we'd never have contemplated the current proposal for wider sidewalks and protected bike lanes.

But over the last few years, our collective consciousness seems to have absorbed some lessons from around Waterloo region and beyond. Streets in our city do not need to be designed for maximum car throughput over all other uses anymore. Instead, we need improvements to the pedestrian realm. We need cycling infrastructure that welcomes everyone, and not just a hardy few. Our main street should support these things, and that means big change for King St.

Some people, in particular a few notable business owners, would prefer to minimize changes. And there is an argument to be made for Uptown: if it ain't broke, don't fix it. Uptown is a raging success, so why tinker? It's reasonable to be wary of the effect any change in parking and car access may have on a business's bottom line

But change comes anyway. By 2017, King Street South will be transformed from a 4 lane arterial to 2 lanes with transitway. And even before the arrival of LRT, our travel pattern is shifting: trips along King that are by car have dipped below 60%, with transit, walking and cycling making up 41% of the mode share at peak times.

And this is despite the fact that Uptown is actually broken and needs fixing. Cramped and worn sidewalks. Substandard lanes that are straddled by the many GRT buses that move through, constricting traffic. When free-flowing vehicles meet a dense pedestrian realm, the results are sometimes fatal. Plenty of bikes on the bike racks, but precious few on the street as cyclists avoid the lanes and instead opt for side streets or just the sidewalk. And yet, Uptown thrives! It does so despite these flaws, not because of them.

So let's imagine how much better it could be if King St were welcoming and accessible to all users.

Two lanes of traffic where four exist now means those lanes can be wide enough for the vehicles that use them, as well as providing enough extra room for emergency vehicles to move up the middle. This, along with a slight reduction in parking spaces (less than 1% of Uptown's parking supply!) provides the room for wide sidewalks for the many pedestrians, with the opportunity for sidewalk seating at cafes.

In addition, there is room to make a protected bike lane connection along King all the way from University to Erb. This will link Wilfrid Laurier University and the many apartments popping up along King to Uptown, while the LRT project will provide bike lanes (albeit unbuffered) through to downtown Kitchener. The Iron Horse and Laurel trails are nearby, along with the future Spur trail and planned crosstown on-street cycling links. These interconnections provide a useful cycling network within reach of the majority who are interested but concerned about using the bicycle for short trips.

And for those businesses along King whose owners are concerned about the effect these changes may bring, I would urge them to consider the upside. There are two to three thousand more residents coming soon within 500m of the King St. corridor who will live in buildings with low parking ratios and they will have easy, convenient access to Uptown thanks to these improvements. They'll be a virtually captive market for uptown retailers, in fact.

Automobile access will still exist, but pessimistically drawing a straight line from "reduced traffic lanes and parking" to "depressed business" ignores the realities that (a) drivers still arrive to King St. businesses on foot (even if they parked down the block) and will be influenced by the state of the pedestrian realm, and (b) once a potential customer is in the car, the Uptown business may have already lost as Uptown is now as close, or far away, as our malls and box stores. The key for success in Uptown is to be as accessible and welcoming as possible to people who have the option to not drive, because these people are growing in number.

These people have a right to shape this city as they want. Businesses in Uptown are stakeholders in the streetscape redesign, to be sure. Their needs and concerns must be listened to. But they must be weighed against the needs and desires of all who live, work and play in Uptown Waterloo, as well as taken in context with the growing body of evidence that our city cores can be "complete streets" and vibrant and successful.

We have a unique opportunity to turn Uptown's King St. in to the kind of Main Street that Waterloo deserves, and with an project lifetime of 25 years, this kind of opportunity only comes around once in a generation. At the same time, we're recognizing both the need for walkability and for cycling infrastructure that the average person finds welcoming, and how these strengths tie in to the adoption of transit and the reduction of traffic congestion in a region that has grown by leaps and bounds. The stage is set.

A lot has to go right for the proposal to become a reality. Project staff need to feel confident about recommending this proposal, and that requires vocal popular support at the May 29th Public Consultation Centre. The city of Waterloo council needs to endorse the recommendation, and then (because it's a two-level project) the regional council needs to approve it. All of that could happen by this fall, if we are willing to speak up in favour of it.


So speak up. This is local, direct engagement with a real potential to shape this city in a positive way. How much more incentive do you need?