A cyclist's take on Lexington upgrades


By any standards, cyclists in Waterloo should be pleased that Lexington is getting attention right now. Though, cyclists won't be entirely pleased with the proposed alternatives. How you feel will depend a lot on how you perceive the proverbial half-empty, half-filled cup.

Four alternatives were on display at the PIC session on Lexington Drive tonight. One was a "long-term" preferred plan, and unless the City of Waterloo suddenly realizes it left $7 million in its other pair of jeans, it won't happen for 5-7 years.

Three short-term plans were shown. Their budget is much more modest, closer to $300,000, and one of them will be underway next year if it gets council approval. They are compromises, trying to build a decent cycling and pedestrian connection between Weber and Davenport.

One alternative, a multi-use trail on the south side of Lexington from Weber up to the bridge, was already mostly out of the running. It's a two horse race between two other options.

Here, Lexington remains 4 lanes until Lexington Court, at the top of the hill. There, it moves to a 3-lane road diet configuration with bike lanes. Along the 4-lane section a multi-use trail is available. At the Lexington intersection, the trail ends and a crossing to the eastbound bike lane is provided, with a pedestrian refuge island. 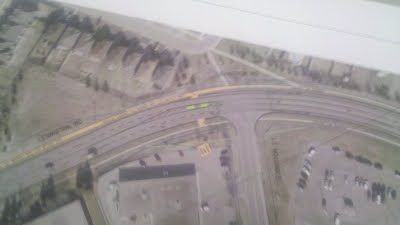 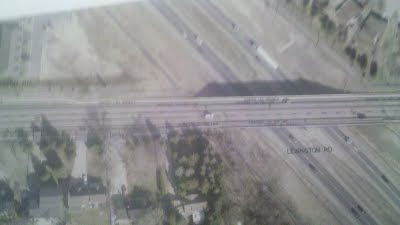 Alternative 3(a): North-side Multi-use Trail to the edge of the Highway 85 bridge, cycling lanes, 2 east-bound and 1 westbound lane across bridge to Davenport

In this option, Lexington remains 4 lanes up until the bridge. From Davenport to the west side of the bridge, there is only one lane for westbound traffic. This gives room for bike lanes, which terminate after the bridge. Westbound cyclists move over from the cycling lane onto the trail, while eastbound cyclists would come to the end of the trail and would have to wait to cross over to their bike lane. There is no room for a pedestrian refuge here. 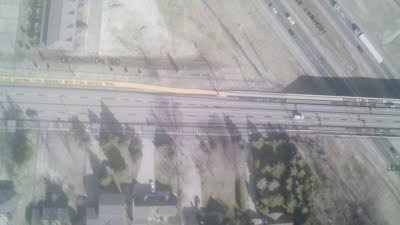 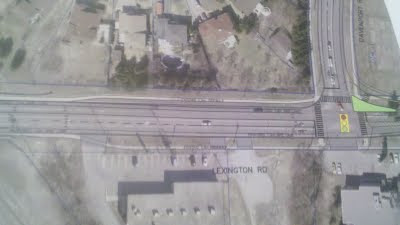 I'm not really happy with either of these options, though both represent an improvement from the status quo. I challenged the representatives on a number of points:

1. Why not cycling lanes all the way through?

Their answer: That is the "long term" plan which requires widening of Lexington and is not expected to be supported due to cost currently. Outlook for the long term plan: 5-7 years.

2. Why not carry the multi-use trail past the bridge?

Their answer: Engineering and drainage issues complicate changing the bridge's surface configuration. Politics as well: Lexington is the city's, the bridge requires going to the MTO.

(I got the impression that anything beyond repainting the bridge's lanes would be a tough sell because of the MTO.)

3. Terminating the trail at the bridge will result in a lot of cyclists crossing on the sidewalk. Potentially very dangerous given the height of the guardrails.

They did not have a good answer for this. Though they did point out that cyclists do this now, which is true.

Their answer: This can only be done at the intersection where the turn lane shadow exists.

Overall, I had a slight preference for alternative 2, the road diet option: it provides a better crossing point at an existing intersection with the refuge island, and reduces the amount of cyclists who will shortcut on the sidewalk (or worse, in the oncoming bike lane). I'd also really like to see the effect of even this limited road diet.

I had one constructive suggestion for this option: terminate the westbound cycling lane before the Lexington Ct. intersection and provide another ramp there for westbound transfer from bike lane to trail and to connecting paths into the subdivision... and extend the trail to meet that point (leaving the other crossing and bikelane unchanged.) This suggestion was well-received.

Not clear which option will be recommended. One person told me 3(a) was preferred currently but another said that 2 was the leader going into this meeting.

Overall, the possibility that even these imperfect solutions could be acted on next year is something that makes me guardedly optimistic. The reconfiguration really is to the benefit of cyclists and no one else, and even if it isn't ideal, a good plan now is better than waiting for a better plan 7 years hence. And Lexington is the key crossing point for cyclists over Highway 85. Either enhancement would be welcome to me.